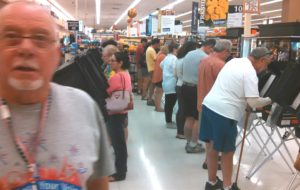 This last week, Donald Trump claimed in the third and final Presidential Debate, the elections are rigged. Many in the political elite scoffed at him for saying such a thing. They called him UN-American and a threat to our tradition of the peaceful transition of power. But the system fails to provide transparency and cloaks itself in secrecy protected by laws that spur suspicion.

Here in Clark County, NEWSMAXTV LAS VEGAS Political reporter Rob Lauer was turned away from a polling station inside a grocery store. He was told he could not, as a reporter, observe the process going on. But before that occurred, a person working at the polling station described how the election machines are handled, raising serious questions about the security of the vote count.

According to the unnamed source at a polling station located in a grocery store, the voting machines are removed every night, driven to a warehouse where they are stored. The machines are so old, that they require extensive maintenance every night.  So the public is asked to trust SEIU Clark County Government workers to transport the machines, work on the machines and drive them back to the polling station the next day without any outside observers. The SEIU (Service Employees International Union Nevada Local 1107) have sworn their allegiance to Hillary Clinton and the Democratic party. The public is asked to trust a County with not one Republican elected official and trust voting officials appointed by Harry Reid’s supporters.

And to make things worse, the Clark County Elections Department blocked, in District Court, an effort to examine the machines and software earlier this summer. The lack of transparency is certainly adding fuel to the fire of fear that the system is rigged.

If they have nothing to hide then stop hiding.