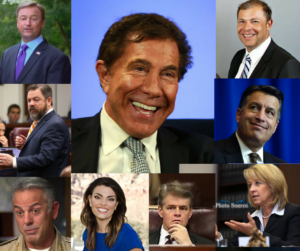 After two weeks of Nevada public figures’ outrage over recent reports about Steve Wynn’s sexual exploits in Las Vegas over the past 30 years, here is the list the names of NV lawmakers and groups who received the most money from him in recent years.

Steve Wynn stepped down this week as CEO from Wynn Resorts.

This is only a partial list and may only account for a portion of the money they actually received. Steve Wynn gave millions to NV lawmakers and law enforcers over the years through a host of entities and through his wife Andrea, as reported on the Nevada Secretary of State website. Wynn gave to judges, lawmakers of both parties, to county commissioners and to both political parties. Now the question is, should they give Wynn’s money back or to charity?

Here is a partial list of those who received money from Steve Wynn, his wife, and his entities:

and many many more