POLL: IS IT TIME FOR AN OUTSIDE SPECIAL PROSECUTOR TO TAKE OVER THE VEGAS MASS SHOOTING INVESTIGATION?

POLL: IS IT TIME FOR AN OUTSIDE SPECIAL PROSECUTOR TO TAKE OVER THE VEGAS MASS SHOOTING INVESTIGATION? 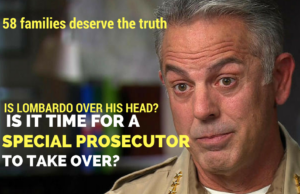 After almost a month, there are more questions than answers and every day there’s a new shocking revelation it seems.

The public has lost all confidence in Sheriff Lombardo. Many people are speculating the FBI is controlling him. Some say he’s bought and paid for by the MGM. Some say he’s just over his head and incompetent.

It’s time for an outside special prosecutor to investigate the Vegas Mass Shooting with full transparency. There’s supposedly no longer any threat to the public. They’ve had almost a month now, with some 200 FBI agents, thousands of Metro Police available to them and a host of other federal and state law enforcement agencies supporting the investigation. So there’s no excuse for the lack of transparency.

58 Families deserve the truth now. Time is up!