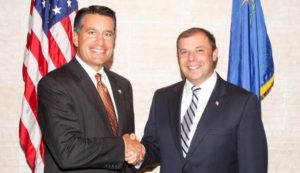 Too many times over the past several years, we have seen Republicans here in Nevada and at the national level campaign as conservatives, but govern like Democrats. And all too often we have seen too many people vote blindly for the person with an “R” next to their name ignoring their record of deceit.

Four years ago the entire Nevada Republican Establishment, including the Governor, ran on a platform against any new taxes and then once elected, they passed the biggest tax increase in the State’s history.

It’s time we put God, Country, Family and our values before party. Being a Republican just isn’t enough anymore. Not when our Republican leadership in Congress refuses to repeal Obamacare, refuses to build a border wall and now wants to give millions of illegal aliens a pathway to citizenship.

We need to hold our elected officials accountable for their voting records.  All too often too many Republicans defend their friends in office, even those with horrible records. But I think it’s just the opposite. We need to tell our friends in office the truth and make sure they keep the promises they made to us when they asked for our money and our votes.

At the end of the day does it really matter if it was Republican or Democrat that raised your taxes, passed amnesty and stole a little more of your freedom? Regardless if they are our friends, they must be replaced with people who will keep their promises and defend our liberty. Having an “R” next to their name is simply not enough anymore.