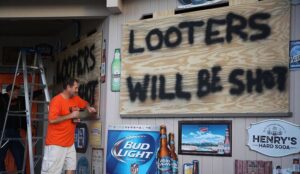 Over the past couple of days I’ve been to grocery stores seeking daily food needs only to find most shelves stripped bare. But I also noticed something else. The people in the stores seemed right on the edge of all out looting. I actual lived through the 1992 LA riots while attending USC. I saw from the roof top of the apartment building I was living at near Normandy and MLK Blvd thousands of people burning and looting businesses around me. I had a pistol on me at all times then. Screw California gun laws. It got so bad, President Bush ordered the Marines and U.S. Army Military Police into the city with orders to shoot anyone on the streets past curfew. The one thing I learned was the Police were not coming to help; we were completely on our own.

If the situation turns bad in Las Vegas, and we see a city wide lock down, bet on desperate people who live on the edge, with nothing to lose, using this opportunity to loot homes and businesses. Yesterday I decide to go buy some ammo. The local gun store had a huge crowd with long lines of folks buying everything. BTW this is why you need an AR15. A pistol is not sufficient to stop a mob of looters, many of whom will also be armed. This is why you need an AR15.

The right to bear arms listed in the U.S. Constitution under the 2nd Amendment was inserted to guarantee the government could not take away the basic human right to self-defense. Today’s very real threat of wide scale looting and violence is exactly why there’s an individual right to bear arms. With only 2,200 Metro police, maybe a few thousand National Guard, there’s no way they can answer calls for service for some 2.8 million people in Clark County with wide scale looting. BTW when the LAPD did come, they often arrested the armed Korean shopkeepers on the roof tops defending their businesses from gangs of looters. So if your home or business becomes the target of looters, you better be prepared to defend yourself and your family with fire arms because the police are not coming.