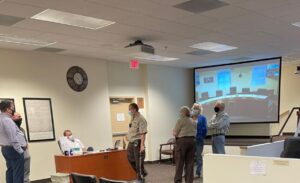 Last month the Nye County Commission voted to FULLY reopen the county and end Sisolak’s mask mandate. Even though the County ended the mask mandate, the County Manager Tim Sutton is insisting on enforcing it even in the commission meetings. But one commissioner refuses to wear his mask and stood up to the county manager.

Yesterday Leo attended a meeting in the commission chambers without a mask and the county manager and sheriff threatened to remove Leo by force if he refused to wear a mask. So today at 10am Leo and his wife plan on challenging them again, but this time with a chamber audience full of supporters without masks too.

Nye County Commissioner Leo Blundo’s wife Melissa issued a statement yesterday stating “He’s not wearing a mask tomorrow. Neither am I. And a lot of people plan on being there not wearing a mask. Its Going to be interesting tomorrow”.

The issues at hand are:

This isn’t the first time Nye County Manager Timothy Sutton has broke law and violated the rights of folks in Nye County. In fact, Sutton has been wrong more often than right. Sutton unlawfully ordered Assembly Candidate and Brothel owner Dennis Hoff’s campaign signs be removed by county workers the weekend before the primary election. But a federal judge order him to return the signs forthwith. Sutton then stripped Hoff of his brothel license and again the federal judge found Sutton violated Hoff’s civil rights and ordered his license be reinstated within 24 hours.

Sutton filed an ethics complaint against Commissioner Leo Blundo after he voted for CV19 relief funding for local businesses, claiming Leo violated the law because he owns a local small business. Blundo was arrested on Thanksgiving based solely on the criminal complaint he gave a Nye County Sheriff’s Captain. The DA recused himself, it went to the Nevada Attorney General’s office for review who found Blundo had no wrongdoing and no charges were ever brought forth against Blundo.

And now the same County Manager, Tim Sutton, ordered Leo to wear his mask or be forcefully removed by the sheriff.