CLARK COUNTY HOMELESS OUT OF CONTROL

CLARK COUNTY HOMELESS OUT OF CONTROL 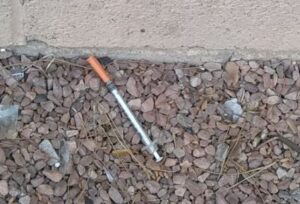 A Real Used Needle Left By a Homeless Junkie

Clark County Homeless are breaking into businesses, stealing any scrap metal they can get their hands on, including stealing copper electrical wires from street lights. They set fires in vacant homes and buildings trying to keep warm. All this is driven by the opioid scourge. Much of the Homeless in Clark County is driven by drug addiction, not financial issues. And the evidence is everywhere you look. 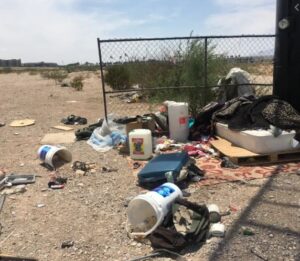 Homeless are leaving a river of used needles across the valley. Needles handed out for free by Clark County Health Officials and do gooder nonprofits. Thousands of needles they handed out ultimately are dumped everywhere, including parks where kids play.

Groups like The Trac–B Exchange hand out needles to the homeless. In all fairness they try to get the junkies to return their used needles with rewards and clean needles but they’re homeless junkies who don’t care about their own well-being.

At the same time Clark County fines property owners who fail to timely clean up the trash and needles left behind by the homeless. Homeless take trash bags from local apartments and businesses, break open the bags looking for bottles and anything else they can get cash from recycling, leaving the trash for the property owners to deal with. In today’s catch and release court system, homeless are rarely held in jail after being arrested for trespassing. Police are reluctant to arrest them out of fear from activist groups. So property owners are left bearing the burden of used needles and trash.

The City of Las Vegas passed ordinances reining the homeless in hitting huge push back from activist groups. It’s time to clean up our streets, allies, tunnels and washes. The rest of us have rights too. The rest of us have a right not to have to dodge used needles from homeless junkies in the allies behind our homes, in the parks where our kids play and at our businesses.