Venetian Casino On the Market for $6 Billion

Venetian Casino On the Market for $6 Billion 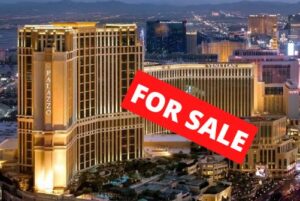 After Sheldon Adelson’s Las Vegas Casino, the Venetian, posted a $40 million loss in the 3rd quarter, its now on the market, asking price $6 Billion. Sand Corp, which owns and operates the Venetian and the Palazzo in Las Vegas and casinos in Singapore and Macao, plus over 1 million sq feet of convention space in Las Vegas, are bleeding red like most companies on the strip.

Interesting to note, Sand’s Corp posted a profit $70 million at the Marina Bay Sands (MBS) in Singapore. Sand’s convention business is critical to its survival and long term profitability and that business is dead until at least Q3 of next year according to Gov. Sisolak.

The news will certainly send shock waves through Las Vegas and add to the uncertainty for labor and investors alike.

Sheldon Adelson is a mega donor of Pres. Trump’s and Israel.

Las Vegas Sand Corp (LVS) shares were trading up by as much as 12 percent today in after hours markets, according to news reports.