Anthony Hudson, aka Drag Clown Carla Rossi, is coming to the Clark County Library next week, where he will also host Teen Drag programs at the end of the month. Carla Rossi is the infamous Drag Queen from Portland, Oregon who had allowed children to crawl on top of him in the Multnomah County libraries. The revelation of this inappropriate contact went all over the country—and all over the world—forcing the library system to remove the photos from public view. Worse yet, Mr. Hudson, in an attempt to absolve himself of any wrongdoing, is now claiming that the children knocked him over.

Chairman David Sadjak and the Clark County Republican Party have refused to take a stand against Drag Queen Story Time at Clark County Libraries. Not a peep about this. 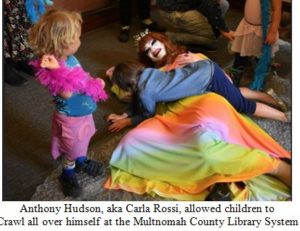 Time and place of the next Drag Queen Story Time In Las Vegas.