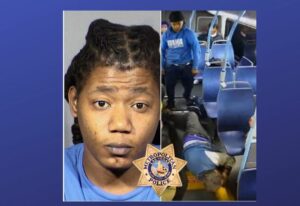 Thug Graves, was arrested in November 2002 and charged with over 20 violent crimes, including kidnapping, multiple attempted murders charges, USE OF A DEADLY WEAPON OR TEAR GAS IN COMMISSION OF A CRIME, conspiracy to commit murder, robbery. It took until 2008 for Graves to go to trial where he entered a plea deal and now roams our streets. But these 20 charges came only after Graves was arrested six prior times and charged with more than 20 violent crimes, including sexual assault, selling drugs, gun crimes, ect ect.

Now fast forward to 2020, and Mr. Graves attacks an innocent senior citizen on a bus knocking out his eye.

In 1994, California pasted their own criminal justice reform laws called 3 strikes and you are out.

When California pasted 3 strikes, crime dropped. A study, Does Three Strikes Deter? A Non-Parametric Estimation, published by researchers at George Mason University found that arrest rates in California were up to 20% lower for the group of offenders convicted of two-strike eligible offenses, compared to those convicted of one-strike eligible offenses. The study concluded that the three-strikes policy was deterring recidivists from committing crimes. California has seen a reduction in criminal activity “Stolzenberg and D’Alessio found that serious crime in California’s 10 largest cities collectively had dropped 15% during the 3-year post-intervention period“[38]

Not everyone is redeemable. Not everyone can be saved. Nathanial Graves is a prime example of why Nevada needs it’s own 3 strikes law. Nathanial Graves should never have been allowed out of prison after the first 20 felonies. He certainly should have been given the max of 60 months in 2016 when he was caught again with an illegal firearm.

It seems our society keeps going back and forth between trying to give folks a second chance and a third and a tenth and eventually crime gets so bad we snap back with harsher laws. Folks who use a deadly weapon in the commission of a crime must be removed from our society for a very long time. The primary purpose of government is not to reform thugs, but to protect innocent people like the senior citizen on the bus from thugs like Nathanial Graves by locking them up for a very very long time after they’ve had 2nd and third chances.

Its time Nevada considers its own 3 strikes laws and protect innocent people first.