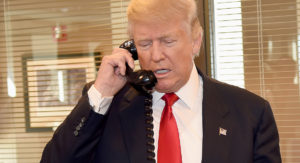 After President Trump released the transcript of his phone call with the President of the Ukraine showing no offer of aid in return for Ukraine looking into Joe Biden’s corruption, (no crime) did the President play the News Media and Dems? Did President Trump fool the Dems and media into covering the Biden corruption scandal? It sure looks like Trump knew all along what was on the transcript and now some are asking if he planted the unnamed “Whistle blower” to Robe-a-Dope the News Media and Dems? It sure looks like Liberals fell for it hook, line and sinker.

Today the Dems and News Media look like fools.