TUPAC SHAKUR MURDER CAR IS UP FOR SALE $1.5 MILLION

TUPAC SHAKUR MURDER CAR IS UP FOR SALE $1.5 MILLION 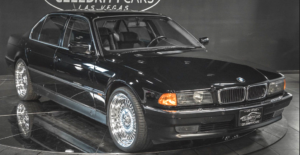 This is the actual car that Tupac Shakur was shot while riding in after a Fight at the MGM in Las Vegas.  It was driven by Suge Knight and originally leased by Death Row Records.
This is the first time this car has ever been up for sale or on display since his death in 1996.  It has been completely restored to the condition it was in before his death and has just received a new coat of paint.  There is a small indentation where we believe one of the bullet holes was but it is hard to tell. Other than that it is fully restored.  The photo of the bullet holes is just for reference.    The wheels have been replaced with the same wheels that it had at the time of the shooting.   It runs great and is in excellent condition.

The shooting occurred September, 7th 1996 at 11:15 p.m. pacific time when the car with Shakur and Knight stopped at a red light at East Flamingo Road and Koval Lane.  Shakur was struck by four .40 caliber rounds fired from a Glock two in the chest, one in the arm, and one in the thigh. 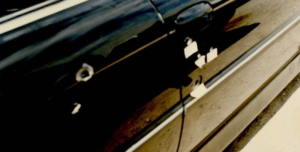