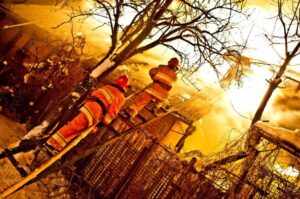 According to law enforcement sources, the Biden U.S. Forest Service may have chased away Cal Fire crews and Nevada Fire Crews when the Tamarack Fire first started. The Biden U.S. Forest Service had a fire crew air-born when the fire first started but ordered their crew to stand down intentionally allowing it to grow from one tree to now over 58,000 acres.

“The lightning-sparked Tamarack Fire, first discovered in the Humboldt-Toiyabe National Forest, was initially confined to a single tree burning on a ridge top with sparse fuels and natural barriers to contain it,” according to the U.S. Forest Service.

“The tactical management decision is not to insert fire crews due to safety concerns, however, this is not an unresponsive approach,” the Biden Forest Service went on to say “the steep, rugged, and remote terrain presented challenges to safely suppress this wilderness fire”

Forest Service budgets and salaries are directly effected by fire fighting. Fires are big business and could mean the difference between $36,000 a yr and $100K salary with overtime and hazard pay. (R) Nevada Assemblyman Jim Wheeler is calling for an investigation into the Tamarack fire and the Forest Service’s actions. No comment at all from Congressman Mark Amodei so far.