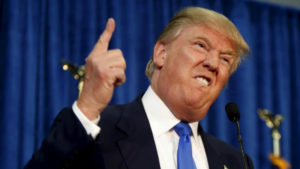 If you thought President Trump’s recent attacks on NFL players showing disrespect kneeling while the national anthem was playing was just off the cuff hyperbole, think again. The major liberal mainstream media networks have hounded Trump ever since he ran for office. Their constant attacks on Trump have been merciless.

Trump knows his supporters are the majority of the NFL’s fans, so he can crush their rates calling for a boycott. This week over a third of Americans refused to watch NFL games in the wake of Trump’s call for a boycott. According to Neilson ratings, the number of viewers of NFL games in the first two weeks of the regular season are down by as much as 19%.  That means the advertising rates the networks charge will have to decline as well.

Trump is costing the liberal media networks millions in advertising dollars, all while defending the flag and the national anthem. This is a win-win strategy for Trump.