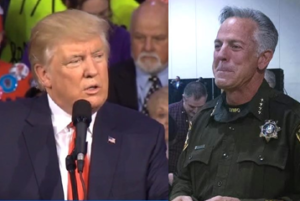 This Wednesday, U.S. Attorney General Jeff Sessions will be in Las Vegas leading an investigation into Clark County Sheriff Joe Lombardo over his sanctuary violations noted in several ICE reports. Session will be at the U.S. Attorney’s Office meeting with ICE and other local officials.

According to Sessions, he will also interview Sheriff Lombardo personally to determine whether to release $975,000 in federal grant funds awarded to Clark County for the gang unit. The funds are currently frozen.

On April 21, 2017 U.S. Attorney Jeff Sessions issued a cease and desist letter to eight jurisdictions nationwide including Las Vegas to stop Sanctuary City Policies or face losing federal grant money. In the letter Session demands Metro Police prove they are in compliance or risk losing federal money. Lombardo has until June 30, 2017 to comply or lose over $6 million in federal grant money according to Session’s letter.