HELLER AT 19%: IS HELLER TRYING TO FOOL REPUBLICANS ABOUT SANCTUARY CITIES AFTER VOTING WITH REID HALF THE TIME?

HELLER AT 19%:IS HELLER TRYING TO FOOL REPUBLICANS ABOUT SANCTUARY CITIES AFTER VOTING WITH REID HALF THE TIME? 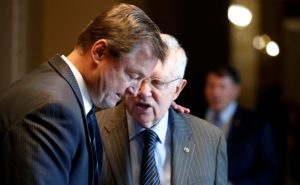 Senator Heller came out this week attacking Jacky Rosen and Dina Titus for their support of sanctuary cities. But it wasn’t that long ago when (about 2 months) Sen. Heller refused to vote to withhold federal funding to sanctuary cities and he refused to cut spending for Muslim refugees flooding into our country from Syria and other terrorist strongholds in the Middle East.

The fact is sanctuary cities has become the buzzwords politicians now use to get their voters rallied up. But Sen. Heller still supports, (by looking at his votes) more Medicaid for illegal aliens and refugees, Heller opposes building a wall on our southern border and he voted against cutting off funding for Muslim refugee programs. Heller has led the effort to give amnesty to millions of illegal aliens in the U.S. even dangerous criminals.

But it’s an election year and Heller is expecting to face a primary opponent. So Heller is trying to move to the right and co-op the language and issues that he is most vulnerable on. Heller was a never Trumper and two months ago he called for a special prosecutor to investigate President Trump over his firing of FBI Director Comey.

Just a couple of weeks ago Heller came out in support of funding Planned Parenthood and Obamacare refusing to vote for repeal.

According to several Washington D.C. based groups, Heller voted over half the time with Harry Reid and the Democrats over the last 6 years.

So the question is, which Dean Heller should voters believe now? According to internal polls sources told us, Heller is polling at about 19% in the Republican party currently.