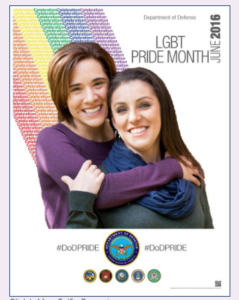 June 2016 was the last year the U.S. military celebrated Gay Pride Month. One year later President Trump put an end to the Obama policy. This follows last week’s announcement that the Trump Department of Defense would be suspending the Obama policy opening the military up to transgenders.

When 360Daily.net asked for an accounting of the total funds used to celebrate Gay Pride Month last year no one could or would answer the request.

The Trump administration has shifted away from the Obama Administration’s social liberal policies imposed on US military personnel and moved towards spending more money on pay raises and new equipment.

According to DOD budget experts, the Obama Administration spent more than $80 million over its term on Gay Pride Month celebrations in the military.  President Obama refused to give troops a pay raise last year claiming budget issues. President Trump signed a bill this year giving the troops the largest pay raise in six years.

See the 2016 Gay pride monthly Message to the Troops by Clicking Here: