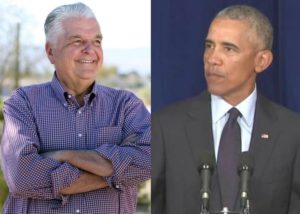 This week, both former President Obama and former Attorney General Eric Holder endorsed Clark County Commissioner Steve Sisolak for Nevada Governor. What was surprising about the endorsements was the timing. Many Democrats are wondering why they didn’t endorse Sisolak during the primary?

Sisolak was locked in what many thought was a tough primary against Chris G. that moved him the left and cost him a ton of cash to win. With the passing of Labor Day, the official start of the campaign season seems to be moving both Adam Laxalt and Steve Sisolak with a sense of urgency as they enter the last 60 days of the campaign.

With the economy hitting new highs and with the housing market in Nevada one the hottest in the country, many experts see this campaign as a test between Trump’s vision and his guy Adam Laxalt and Obama and Harry Reid’s guy Steve Sisolak. Even former Presidential Candidate Ron Paul has weight in endorsing Ryan Bundy for Nevada Governor. Recently, current Republican Governor Brian Sandoval refused to endorse Adam Laxalt helping Steve Sisolak.

The RNC and the Nevada State Republican Party have sunk millions into Nevada to reduce their voter registration deficit with the Democrats. So a lot is riding on this race and all eyes are watching. With a huge influx of Hispanics over the last 10 years, the state has moved decidedly to the left. So many Republicans are openly worried about the direction of the state.  The race for Nevada’s governor will have major consequences at the national level and that’s why Obama and Holder stepped in now to push Sisolak over the finish line.