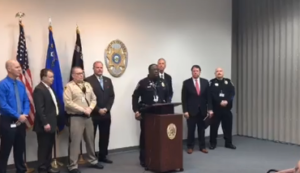 Last week 360Daily.net reported about a series of arrests in the Vegas valley of school officials engaging in sexual misconduct with students. Today Clark County School District held a news conference in response at the CCSD Police Headquarters to reassure parents and the public after the arrests this year of eight school employees for sexual misconduct with students.

But there was no actual changes in any policy nor any added police task force announced today to combat what has become a scary serials of arrests in the first 3 months of this year.

According to the CCSD Police Chief, there currently are no social media policies for teacher/student guidelines. A policy is being developed.

Over the last three years, 2014, 2015, 2016, over 30 Adults, mostly male teachers, have been arrested inside Clark County School District by police for sexual misconduct. This year they have already arrested eight people for sexual misconduct, including one kindergarten teacher for kidnapping a 16 year old girl and keeping her in his apartment as a sex slave.

According to Superintendent Pat Skorkowsky, teacher collective bargaining can interfere with CCSD Police investigating allegations of sexual misconduct by teachers.

Trustee Kevin Child told 360Daily.net “I am calling for a round table discussion to explore everything we can possibly do to protect our kids. And yes it will be transparent and open to the public.”