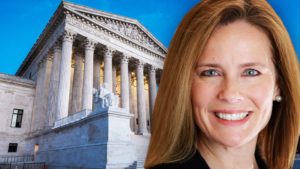 Lost in the circus of the U.S. Senate process was any mention of Kavanaugh’s record on the bench. One look at his written decisions and any one can see Kavanaugh fully supports warrant-less searches, police tracking citizens with GPS devices attached to cars without a warrant and practically anything kind of government spying on citizens. Kavanuagh is an enemy of the 4th Amendment. And while Judge Barrett lacks the depth of written decisions, her writings seem to support her full embrace of all our God given rights afforded to every American in the U.S. Constitution.

On May 8, 2017, President Trump nominated Amy Coney Barrett to the United States Court of Appeals for the Seventh Circuit. After taking a grilling for her faith by Diane Feinstein, Barrett was confirmed. Barrett was one of the finalists this summer when President Trump was considering who to nominate to fill the upcoming vacancy created when Justice Kennedy announced he was retiring.

About Judge Barrett as reported:

After graduation, Barrett served as a law clerk to Judge Laurence Silberman of the United States Court of Appeals for the District of Columbia Circuit.[8] She then spent a year as a clerk to Associate Justice Antonin Scalia of the Supreme Court of the United States from 1998–99.[8] From 1999 to 2002, she practiced law at Miller, Cassidy, Larroca & Lewin in Washington, D.C.[9][10]

Barrett spent a year as a law and economics fellow at George Washington University before heading to her alma mater, Notre Dame, in 2002 to teach federal courts, constitutional law and statutory interpretation; she was named a Professor of Law in 2010, and, from 2014–17, held the Diane and M.O. Miller Research Chair of Law.[11][6]. Barrett twice received a “distinguished professor of the year” award, in 2010 and 2016.[6] Barrett continues to teach as a sitting judge.[12]

Judge Kavanuagh was pushed by President Bush and other insiders in Washington D.C. Kavanuagh’s questionable decisions include:

In Klayman v. Obama (2015), Kavanaugh concurred when the circuit court denied an en banc rehearing of its decision to vacate a district court order blocking the National Security Agency‘s warrant-less bulk collection of telephony metadata.[115][116] In his concurrence, Kavanaugh wrote that the metadata collection was not a search, and, even if it were, no reasonable suspicion would be required because of the government’s special need to prevent terrorist attacks.[117]

United States v. Jones, 565 U.S. 400 (2012),[1] was a United States Supreme Court case which held that installing a Global Positioning System (GPS) tracking device on a vehicle and using the device to monitor the vehicle’s movements constitutes a search under the Fourth Amendment.

In 2004 defendant Jones was suspected of drug trafficking. Police investigators asked for and received a warrant to attach a GPS tracking device to the underside of the defendant’s car but then exceeded the warrant’s scope in both geography and length of time. The Supreme Court justices voted unanimously that this was a “search” under the Fourth Amendment, although they were split 5-4 as to the fundamental reasons behind that conclusion. The majority held that by physically installing the GPS device on the defendant’s car, the police had committed a trespass against Jones’ “personal effects” – this trespass, in an attempt to obtain information, constituted a search per se.

Kavanaugh did not believe police violated Jone’s 4th Amendment rights when they installed a GPS tracker on his car that exceeded the original search warrant restrictions. The judge said police can install GPS trackers without a warrant.

As one can see, I did not mention the current scandalous claims against Judge Kavanaugh as a basis for not supporting him, rather I used his written decisions and voting record to arrive at my decision.

It’s not always the case when we get a second chance get it right. But let’s take this opportunity and fully support the right person to fill Kennedy’s seat. Support Judge Amy Barrett.