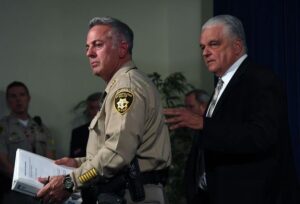 According to NRS 414,155 Gov. Sisolak’s Declaration of Emergency Order shutting down gun stores earlier this month, after labeling them non-essential, broke the law. According to firearms lawyer Don Green “The reason why they can remain open, if they chose to do so, is that we have a law in Nevada. It’s NRS 414.155. It’s very clear. It’s probably one of the most clear statutes prohibiting conduct of a government official”.

Sheriff Lombardo refused to enforce Sisolak’s Emergency Declaration against Clark County gun stores saying “I know that’s an exemption referencing the Governor’s ability to through NRS 414, and we haven’t seen anything that indicates it’s going to be a problem,”.

That law limits to the governor’s emergency powers.

NRS 414.155  Limitations on emergency powers relating to firearms.  Pursuant to Amendment II of the Constitution of the United States and Section 11 of Article 1 of the Constitution of the State of Nevada, and notwithstanding any other provision of law, the emergency powers conferred upon the Governor and upon the executive heads or governing bodies of the political subdivisions of this State must not be construed to allow:

1.  The confiscation of a firearm from a person unless the person is:

(a) In unlawful possession of the firearm; or

(b) Unlawfully carrying the firearm; or

2.  The imposition of additional restrictions as to the lawful possession, transfer, sale, carrying, storage, display or use of:

(c) Components of firearms or ammunition.