THE DEM MACHINE JUST SWITCHED ON TO DISPOSE OF BERNIE

THE DEM MACHINE JUST SWITCHED ON TO DISPOSE OF BERNIE 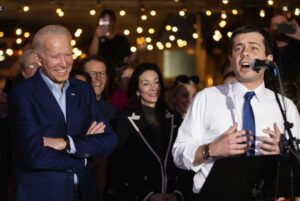 The Democrat Party machine now believes Biden, even with daily gaffs, is their only hope of defeating Bernie Sanders and maybe Pres. Trump, after Biden won South Carolina primary. If you notice, the Democrats refused to lift a s finger for Biden until he actually won a state primary. Tonight, Super Tuesday has some 1,357 delegates up for grabs, a third of all delegates.

Now that Biden won, we see Amy Klobuchar and Mayor Pete pressed to bow out. Bloomberg could have offered them a few million for their support and “consultation” but the Democrat party offered them power. But they didn’t endorse Mike Bloomberg. For these two, political power is far more important than cash.  And keep in mind both have a few million dollars left in their campaign accounts they can continue to use for travel and to pay their spouses a salary to “manage” their social media ect.

There’s also the Dark side of the Dem machine which could have destroy Mayor Pete and Klobuchar if they refused to bow out now. Politicians always do what’s in their own short and long term interest. And for now dropping out and supporting the Party, not Biden, but the party is more important.

The Democrat primary is all about delegates. After Joe Biden’s won South Carolina, he now has 54 delegates to Bernie’s 60 delegates. But with Klobuchar’s 7 and Mayor Pete’s 26 delegates, Biden is the front runner with 87 delegates. BTW Warren has only 8 delegates as of  today, Bloomberg has zero. Today’s Super Tuesday could be the end of Mike Bloomberg’s campaign if the Democrat machine drives delegates and votes to Biden. After today, this could be a two man race between two seventy plus old 1 percenter white Senators.

Yesterday, Sen. Reid finally endorsed Biden, another signal to the Democrat Donor class to support Biden. Biden certainly could have use Reid’s support before the Nevada Caucus. But Biden finally proved he can win something. Look for Warren to exit after tonight’s Super Tuesday contest as the pressure mounts on her to get out too, unless the Democrat machine believes she steals votes from Bernie.

Bernie supporters are already starting to yell about the Democrat machine (establishment) rigging the primary against Bernie. So The media is still treating Bernie with kit gloves and not pounding him with negative stories, because they are deathly afraid of loosing the young an dumb Bernie supporters in November.