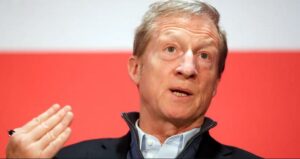 $200 Million doesn’t buy what it used to. Billionaire, Democratic Presidential Candidate, Tom Steyer, bet $200 million he could win the Nevada and South Carolina Dem primaries. But he didn’t even finish in the top 6 spots to qualify for the DNC Debate last night in Las Vegas. He actually lost out to the gay mayor from South Bend. He lost out to Biden. He even lost out to Amy what’s her face. Ouch.

He would have been better off just paying primary voters $1,000 each for their votes. But let’s face it, he had the worst campaign ever. He promised to Kick President Trump’s “Ass” on the economy in his latest TV ad. The best economy in 50 years.
But when interviewed by a Fake News Dem Reporter he could not give one example of how he would kick Trump’s ass on the economy. The secret service didn’t even take him seriously.

He called Pres. Trump a fraud and a failure. Then he talked about climate change and saving the Earth. But then stories of how be made his billions on fossil fuel came out. I guess it takes one to know one. Huh?