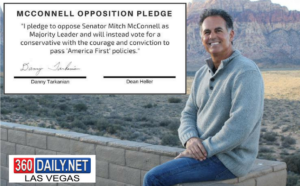 Nevada Republican U.S. Senate Candidate Danny Tarkanian signed a pledge this week NOT to vote for Republican Senate Majority Leader Mitch McConnell if elected to Congress. After McConnell spent over $32 Million dollars supporting Senator Luther Strange to defeat Judge Moore and lost to Moore’s $2 million, there a shift in momentum.

Sensing that shift, today Arizona Senator Jeff Flake announced he would not seek re-election. There’s clearly a movement within the Republican Party away from McConnell. His failure to Repeal Obamacare was the last straw for many Republicans who have felt betrayed over and over again for the past several years.

Senator Heller continues to raise money and march on for now. But he may not have an army to go back to in D.C. soon. McCain, Corker, and Flake are all on their way out of the Senate. Heller is still a Never Trumper and has continued to agitate Trump base voters making him very vulnerable in the primary next June in Nevada. Heller’s open support for Planned Parenthood funding, for Obamacare, for a special prosecutor to investigate Trump have all alienated primary voters. Heller is relying on McConnell to deliver big money to defeat Tarkanian in the primary, but McConnell is now so unpopular he could drag Heller down with him.

Tarkanian has been endorsed by Steve Bannon, who has declared War on Mitch McConnell and the Republican establishment ever since leaving the White House this summer. Bannon, recently in a speech before the CAGOP, took credit for helping Judge Moore beat McConnell’s hand-picked candidate, Luther Strange.

Tarkanian is hoping for a repeat of Judge Moore’s victory in Nevada as he trails in fundraising to a sitting senator with all the power and resources of incumbency. It’s a bold move because if Tarkanian is elected to the Senate, McConnell will still be there as a force to reckon with.