DID WE GET $50 MILLION IN FEDERAL GRANT TERRORISM FUNDING WORTH ON OCT 1?

DID WE GET $50 MILLION IN FEDERAL GRANT TERRORISM FUNDING WORTH ON OCT 1? 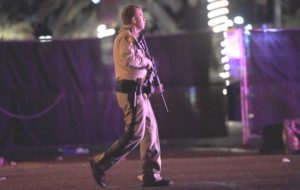 One month later there are more questions than answers in the Las Vegas Mass Shooting. One of the questions that must be asked by responsible people is, after some $50 million dollars in terrorism Federal grant money received by Las Vegas Metro Police since the 911 attacks in 2001, did taxpayers get their money’s worth on Oct 1, 2017?

What special equipment was used, what tactics were developed and deployed? How effective was Metro’s counter-terrorism response? How did Metro spend those dollars over the last 16 years? In the military, an after action report is an essential part of a professional force development, always trying to improve and grow.

Multiple tactical teams on standby 24/7 on the strip and one in each hotel on the strip, like Steve Wynn has.

Repositioning a Metro helicopter at McCarren airport right near the strip.

Every Hotel having a hotline to the Metro command and control center.

Every Hotel on the strip should have its own onsite private tact teams like Steve Wynn and Sheldon Adelson have.

Every Security Guard in strip hotels should be armed.

These just a few of the ideas our authorities and leaders need to consider moving forward.

According to hotel sources, bookings from Asia are way-way down already. Our town will drive on and survive the attack on Oct 1, 2017. But can we survive a second or third attack on the strip?