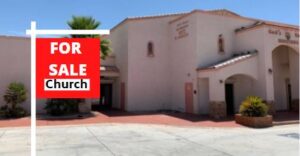 More than 20 churches have been wiped out by Gov. Sisolak’s CV19 emergency orders since March of this year, according to Dan Klatt, who specializes in church finance, lending and sales.

According to Klatt, the number of folks attending Church is down by over 50% since March. Many folks are scared to attend church because of CV19 restrictions.

But many churches are still receiving over 90% of their tidings from their congregations. So that’s why we aren’t seeing a flood of church foreclosures. In addition, many pastors are mastering online services, helping to keep their flock fed with the holy spirit.

But churches that used public school auditoriums on Sunday were completely wiped out by CCSD. But Vegas casinos and the Raiders Stadium construction site were allowed to have thousands of folks under Sisolak’s rules.

With over 450 churches in the Las Vegas valley, only 1, Calvary Chapel on Lone Mountain, has joined the lawsuit against Sisolak’s 50 person limit. The rest of the pastors have refused to join the lawsuit out of fear of alienating church goers who are Democrats. So they remain silent on the politics and plug away, hoping to survive the onslaught.