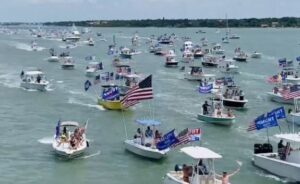 But Trump Parade Organizer, Christine Snedden, fired back saying “I’m not sure why they would want to come, there’s no building out here to burn down and loot.” Snedden went on to say “We’re proudly working Blacks for Trump, Hispanics for Trump and Veterans for Trump. We just want to exercise our Constitutional rights and show support for our President.”

Trump campaign supporters are hosting a Trump boat parade at Lake Mead next weekend Saturday Sept. 12, at 12:30. Inspired by the boat parades in Florida, Texas and many others across the country, Christine Snedden organized her own Trump parade.

Snedden, announced earlier in the week that BLM/Antifa flags are banned from the Trump Boat Parade event. Anyone violating their rules will be asked to leave.

“Fly your Trump, Back the Blue, and American flags. Parade will start at Lake Mead Boat Harbor. GET THERE EARLY TO LAUNCH! Staging will be located in front of PWC Beach and in front of Boulder Beach clearing the Hemingway Launch ramp. Parade will begin promptly at 12:30 pm along Boulder Beach where spectators can wave flags and watch the parade, and continue to the Hoover Dam. Parade will then head back out of canyon along the water ski wall for a #trumptilla float & group picture.

Stand united and sail united, with us, as part of the #trumptilla.

Fly your flags on Boulder Beach or the Marina if you do not have access to a boat. Get there early spots are open to public & first come first serve! Sit back and enjoy the parade! We encourage that you invite one friend that has a different political view. Please share as well.

Please do not contact admins/ hosts for boat rides, rentals. We are here to plan an event to support our president and bring like minded patriots together.”