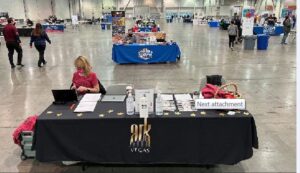 With most of the local Democrat run news media hiding the fact that Nevada has the highest unemployment in Nation for the last 4 months in a row, Sisolak hosted a jobs fair yesterday in Las Vegas.

Sisolak claimed some 180 employers were trying to fill 16,000 jobs. But there was a catch. 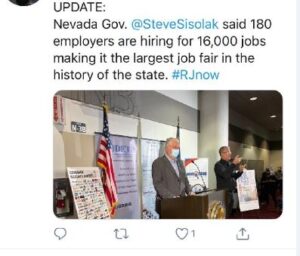 According to folks who attended, only vaccinated job seekers were welcomed. Those unvaxed were offered free vaccines at the event yesterday.

“This report shows rebounding employment growth in Nevada with the state adding 11,200 jobs in October, the second-strongest month of the past year. This growth was spread across many different industries with professional and business services growing the most. The state’s unemployment rate continued to drop, dipping from 7.5 percent in September to 7.3 percent in October, with the unadjusted unemployment rate falling from 6.4 percent to 5.8 percent. The state’s labor market is continuing a rapid recovery as we emerge from the COVID recession,” said David Schmidt, Chief Economist.”

By comparison, Florida has an unemployment rate of just 4.9% for September and only got up to 5.1% in the July. Sisolak continues to try to put lipstick on this pig claiming its getting better. But when you’re last the only direct you have is up