After President Trump held a rally at Minden Airport with some 5,000 folks last night, without masks or social distancing, Governor Sisolak’s folks are warning the President that he may cite the President’s campaign for violating the Governor’s Emergency CV19 directives. 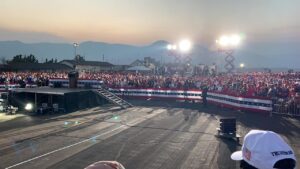 This last week, Governor Sisolak used his power to shut down Pres. Trump’s two scheduled rallies in Nevada at the Reno airport and at the Las Vegas airport. Sisolak, through the Reno Airport authority, threatened the leases of the hangers if they allowed the President to hold rallies in violation of his CV19 directives.

Now Ahern, who owns Xtereme, a factory for heavy construction equipment, the venue of President Trump’s rally today already had his Ahern Hotel’s Trump event shut down and sited by the City of Las Vegas 2 weeks ago for supposedly violating the 50 person limit issued by Gov. Sisolak. The Ahern hotel is suing the City of Las Vegas over their fines and rules.

Local and State authorities have threatened to cite the Trump campaign if they proceed with their event tonight at the Xterme factory. President Trump brushed off Sisoak’s rules and has openly mocked the Governor and his leadership.