When politicians like Gov. Sisolak’s claim they’re restricting your rights because they care about your safety but out of their same mouth they apply a double standard to their friends and supporters, it exposes deep seeded corruption. Yesterday Gov. Sisolak attacked Pres. Trump for holding rallies in Nevada less than 2 months from a national election.

Gov. Sisolak activity called and threatened venues who considered hosting Pres. Trump’s peaceful protests. he blocked the President from holding a rally at Reno Airport and at McCarren Airport. But Don Ahern ignored Sisolak’s threats and proceeded anyway yesterday. Ahern is already suing Sisolak for shutting down an event at his Ahern Hotel last month. 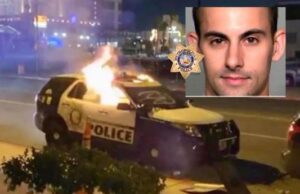 Yet in the attached video, at 5:52, Sisolak says “To those who will be out on our streets asking to be seen and asking to be heard, I thank you”.   June 4, 2020. Sisolak thanks the rioters’ right after acknowledging Officer Shay who was shot in the head by one the rioters. He then went on to call for police to be “patient” with the rioters.