SISOLAK NOT TOO BROKE FOR HIS 4th TAXPAYER FUNDED PLANE

SISOLAK NOT TOO BROKE FOR HIS 4th TAXPAYER FUNDED PLANE 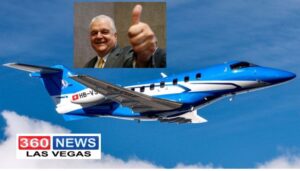 600,00 Nevadans unemployment, a failed DETR system, businesses closed and or capped at 25% occupancy and thousands dead from CV19 in Nevada. Sisolak claiming poverty, asking for tax increases, but not too broke to take delivery last month in January 2021 of the State’s 4th private plane.

The new aircraft, a Pilatus PC-24, is built in Switzerland. NDOT also purchased a brand new King Air 350. NDOT claims they are saving around $2 million in maintenance on the new planes. Only government spends $14 million to save $2 million.

360 did some research and found that the PC-24 fuel costs, on average, are the same and the hourly costs were about the same as the U.S Built Citation CJ4. Both the PC-24 and the U.S. built Citation CJ4 use the same engine, the Williams International FJ44-4A. It’s the Williams engines that delivers the bulk of the savings in terms of fuel and overhaul costs. BTW Williams has a program to refit NDOT’s current Citation II with new Williams engines for around $2 million.

Sisolak and his Rat Pact of Democrat State Governors, including California, Colorado, Washington State and Oregon together are demanding $1 Trillion from Pres. Biden to bail them.