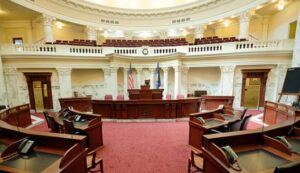 The Senate shall have the sole Power to try all Impeachments. When sitting for that Purpose, they shall be on Oath or Affirmation. When the President of the United States is tried, the Chief Justice shall preside: And no Person shall be convicted without the Concurrence of two thirds of the Members present.

Chief Justice Roberts is refusing to participate in the 2nd Impeachment trial of President Trump this week in the Senate. It’s black letter law. Without The Chief Justice of Supreme Court presiding, the impeachment trial is illegal. But the Constitutional text never stopped Democrats before.

The use of the word SHALL has significant legal meaning. “When drafting a legal document, the term shall is used to say that something must be done, as opposed to the term may which simply means that something is allowed.”

U.S. legal definitions website describes “The word ‘Shall’ has the following meanings: An imperative command; has a duty to or is required to”

Kentucky Senator Rand Paul said this week, “If the chief justice doesn’t preside, I think it’s an illegitimate hearing and really goes to show that it’s not really constitutional to impeach someone who’s not president.”

Even Sen. Elizabeth Warren (D-Mass.) said “That is his constitutional duty. I can’t imagine why a Supreme Court Justice would not do his duty,”

Instead, Vermont Democrat Senate President Pro Tempore Patrick Leahy will preside over the trial. First, he’s not the Chief Justice of the Supreme Court as required by the Constitution. 2nd Leahy voted to impeach Pres. Trump last year. If he was a local Judge, he would have to recuse himself from civil suit involving Donald trump under these circumstances.

Putting aside the issue of whether the U.S. Senate can impeach a former President, without the Supreme Court Chief Justice, it’s just a political circus run by the clowns.