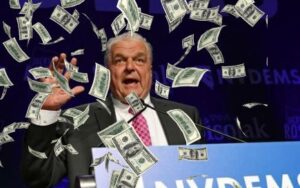 Nevada Governor Steve Sisolak has spent millions on a TV ad claiming he never raised taxes as governor. Not only did Sisolak raise taxes, he raised diesel fuel taxes.

As part of the Dems’ green new deal, Sisolak passed tax increases on diesel fuel in the 2019 Nevada Legislature. With diesel hitting $7 a gallon, truckers and farmers are being hit hard.

This election will come down to the cost of fuel and groceries.

A 2019 state law authorizes county commissions in counties with fewer than 100,000 people (which covers 14 out of the 17 counties in Nevada) to add a tax on every gallon of diesel fuel purchased. So Nevadans can thank our Governor and Democrats for raising the cost of food and everything else delivered by truck. And don’t forget, trucks traveling through those counties to Las Vegas must now also pay the increased Dems’ new Nevada Diesel fuel tax.

Authorizes certain local governments to increase diesel fuel taxes under certain circumstances. (SB48)
Title: AN ACT relating to taxation; authorizing boards of county commissioners in certain smaller counties to impose an additional tax on diesel fuel; authorizing persons who use diesel fuel in motor vehicles operated or intended to operate interstate to request and obtain reimbursement for the tax paid on diesel fuel consumed outside this State under certain circumstances; enacting provisions governing the distribution of the portion of the proceeds of the tax on diesel fuel reserved by the Department of Motor Vehicles to pay reimbursement for the tax; revising provisions governing the projects for which certain smaller counties may use the proceeds of an additional tax on diesel fuel; and providing other matters properly relating thereto.