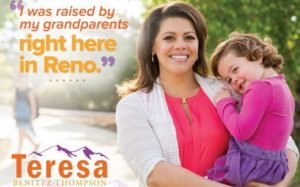 Last week in the Nevada State legislature, the Democratic Floor Leader and Committee Chairwoman Assemblywoman Teresa Benitez-Thompson, refused to provide funds to test and prosecute the rapists of some 8,000 untested rape kits including those involving child rapists. According to police sources, around 13% or about 1,000 of the untested rape kits are those of children who were raped.

So let’s put this in perspective. A woman or child who was raped in Las Vegas, called the police, went to the hospital and got a rape kit administered only to have the rape kit sit in storage for some 10 years without it tested. Imagine how they must feel. Most rapists don’t just do it once. They repeat the crime over and over and so the rape kit testing is critical to stopping violent rapists and saving other women and children from becoming rape victims or even being killed.

According to a defense lawyer we spoke with, the rape kits could also help potentially exonerate innocent people accused of such crimes.

Democrats have controlled the Attorney General’s office and the State Legislature (accept for 2014) for the past 16 years before our current AG Laxalt identified the problem and has made it a centerpiece of his office. And since Governor Sandoval recently signed a bill extending the statute of limitations from four years to twenty years to prosecute rapists, all these old backlogged kits can now be prosecuted.

Assistant Attorney General Wes Duncan testified before the State legislature last week seeking support for a bill to require police to test rape kits within 120 days. At first the Democrats opposed it and wanted things to remain the same where rape kits could languish forever without being tested. But after considerable media pressure the Democrats have now agreed to the 120 testing requirement.

According to sources inside local police, it’s ultimately up to sex crimes detectives to ask for the rape kit testing and then its up to local police departments to either perform the testing in their own lab like Metro can or send it out for testing to a lab. But if there’s no money to fund the average cost of $1,200 per rape kit nothing can be done and rapists continue to rape.

So it is imperative that Democrats, who control the State Legislature, fully fund the rape kit testing 120 day mandatory period as proposed in Laxalt’s bill. But so far Democrats claim the projected cost of $750,000 annually is too much money and they just can’t find the funds. But last week Senate Leader Aaron Ford proposed a bill to provide FREE college for prisoners at a cost of $300,000. Democrats found $300,000 to provide free college for rapists in prison but they can’t find $750,000 to test rape kits to protect women.

In addition millions of dollars will be needed to fund the expert witnesses to testify in any criminal cases brought by the newly tested rape kits, since Governor Sandoval signed a bill extending the statute of limitations from four years to 20 years.