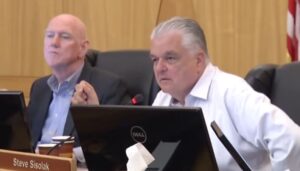 Democrat Gov. Sisolak cited in his State of Emergency statement, his concern that hospitals would get over whelmed if he didn’t shut down Nevada’s Economy. Sisolak “Protecting Nevadans’ public health and safety is my top priority”. As of April 4, 2020, according to the Nevada Department of Health and Human Services, over 1,800 Nevadans have been infected by the coronavirus, mostly clustered in Clark County, with some 46 people losing their lives so far.

Steve Sisolak was first elected to the Clark County Commission in 2009 and was the Chairman from 2013 until he was elected Governor in 2018. During this time no new Level 1 trauma centers were approved. Level 1 trauma centers are state certified and must maintain certain equipment, must be staffed 24/7 with doctors and nurses ready to provide trauma care for patients who suffer from traumatic injuries such as gunshot wounds, falls and car accidents. When hospitals get this designation, must expand the number of ICU beds and their staffing. These Level 1 trauma centers are proving to be invaluable in the fight against corona virus. Hospital staff we spoke with said “Our Level 1 trauma center, our staff and physicians are highly trained and routinely prepare for situations like these”.

According to Kaiser Health News in 2017, Clark County blocked the applications of three hospitals in the Las Vegas area to be designated as Level III trauma centers. Even after the Oct. 1 2017 Las Vegas Mass Shooting where some 500 people were shot, Commission Chairman Sisolak continued to block any permits of new Level 1 ICU Trauma Centers in Clark County.

But the SEIU Nevada Local 1107, which is a core Democrat funding source, donated $100,000 in 2018 to the Democrat front group, Nevadans For Secure Elections, which aided the Governor’s election efforts, in addition to the thousands of dollars the union gave to individual Nevada Democrat Law makers. SEIU claims to have over 9,000 members. 9,000 reliable Democrat voters have an awful lot of juice in Clark County. This may explain why the Clark County Commission and State Democrats blocked any effort by private hospitals to build competing Level 1, Level 2 and Level 3 trauma centers over the past decade.