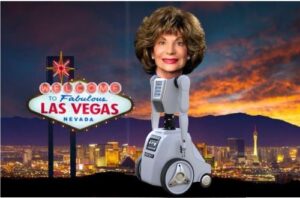 So Dems dug up 5,000 year old Shelly Berkley’s head and put it on a robot to run for mayor of Las Vegas. In a recent statement, Berkley recalled meeting with Lincoln and signing the state charter. While she may be a nice old lady, her Congressional voting record and ties to the Reid Machine make her an unacceptable choice for Republicans.

Berkley admitted to major ethical lapses in Congress on a phone call with Steve Wynn, where she admitted she only voted for Obamacare after Nancy Pelosi personally pressured her and that she really did not want to vote for Obamacare. CNN reported on Shelly and her husband’s dialysis business fraudulently milking Medicare out of millions of dollars.

She lost that race for the U.S. Senate in 2012 to Senator Dean Heller. Now, more than ten years later, she is running for mayor of Las Vegas.

Other possible candidates for Mayor of Las Vegas are expected to emerge, including possibly City Councilwoman Victoria Seaman, along with Cedric Crear, city councilor for Ward 5, and Kara Jenkins, administrator of the Nevada Equal Rights Commission.