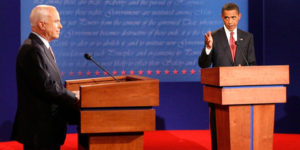 On November 7, 2008 the Guardian reported that, then, Republican Presidential Nominee John McCain’s campaign computer systems were hacked by the Chinese. A New York Times article this weekend in which unnamed sources in the CIA claimed, in the story, said that Russians hacked both the DNC and RNC computer files during this years Presidential elections and may have influenced their outcome helping Donald Trump win. However, Reince Priebus denied RNC computer systems were hacked in a Sunday morning TV interview. And the FBI refutes the claims of Russian hacking during this year’s election.

This Morning on CBS with Charlie Rose, Senator McCain, Chairman of the Senate Armed Services Committee, and incoming Democratic Senate Minority Leader, Chuck Schumer called for a bipartisan investigation into the alleged Russian hacking during the election. Senator McCain went on to confirm, today on TV, that his 2008 Presidential campaign computers were indeed hacked by the Chinese.

According a Guardian article dated November 7, 2008, an FBI agent confirmed Chinese hacks “You have been compromised, and a serious amount of files have been loaded off your system,”. The Secret Service and FBI warned Obama and McCain earlier this year that their computer networks had been infiltrated by foreign hackers who downloaded large quantities of information from the campaign networks.

When one looks at President Obama’s policies over the last 8 years one could easily conclude China benefited by expanding its economic, military and diplomatic power around the world. Millions of US manufacturing jobs were outsourced to China, TTP is a huge benefit to China, China has illegally built a military island in shipping lanes in the South China Sea and China has stolen US military and industrial secrets with impunity during the Obama years.

So, if there is to be a US Senate investigation into hacking of Presidential elections, it should include the 2008 elections too and whether President Obama benefitted from that hacking, because if so, it appears the Chinese got their money’s worth over the last eight years.