EVERY NV SHERIFF EXCEPT LOMBARDO ENDORSES LAXALT FOR GOVERNOR

EVERY NV SHERIFF EXCEPT LOMBARDO ENDORSES LAXALT FOR GOVERNOR 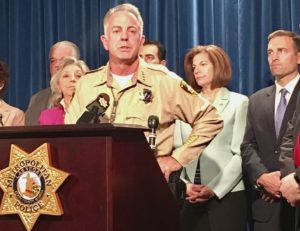 So far, registered Republican, Sheriff Joe Lombardo has refused to endorse Adam Laxalt for Governor, making him the only holdout in the entire Nevada law enforcement community.  Lombardo also broke from his fellow Sheriffs last year when he endorsed Question 1, the flawed background check law.

Even tho Lombardo is making the usual rounds at Republican groups, for some reason he refuses to endorse the Republican for Governor. He was at the UNLV College Republicans this week and a host of other events around town.

Adam is proud to have the endorsement of the following county sheriffs: