SEN.HOWARD,14th Amendment Author, KAMALA HARRIS NOT QUALIFIED TO BE VP 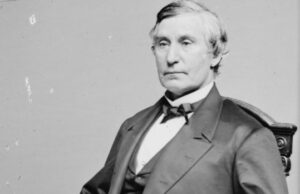 Before the 14th Amendment was ratified, the Republican-controlled House and Senate passed the Civil Rights Act of 1866, its intended purpose to give citizenship to the former slaves. Democrat President Andrew Johnson vetoed the Act, but the House and Senate were able to get 2/3rds vote in both, thereby overriding Johnson’s veto. The Act stated, “That all persons born in the United States and NOT SUBJECT TO ANY FOREIGN POWER, excluding Indians not taxed, are hereby declared to be citizens of the United States…”

However, the Republicans were concerned that some Democrat-controlled Congress and Presidency of the future might overturn the Act, so they decided an amendment to the Constitution was needed and proposed the 14th amendment. In addition, the 1857 Supreme Court ruled in the “Dred Scott” case that Negros could never be citizens so the Civil Rights Act of 1866 was in direct contradiction to the Supreme Court’s Dred Scott ruling.

Senator Jacob Howard, author of the 14th Amendment, made it quite clear in 1866 that the 14th Amendment does NOT give citizenship to the children of foreigners born in the U.S. when he said during a speech on the Senate floor:

Senator Edward Cowen further clarified this at the time:

“[A foreigner in the United States] has a right to the protection of the laws; but he is NOT a citizen in the ordinary acceptance of the word…”

“What do we mean by ‘subject to the jurisdiction of the United States?’ Not owing allegiance to anybody else. That is what it means.”

Senator Trumbull went on to explain how this clause might apply to an American Indian:

“It cannot be said of any Indian who owes allegiance, partial allegiance if you please, to some other Government that he is ‘subject to the jurisdiction of the United States.’”

Senator Reverdy Johnson (D-Md.) explained that parents must be “subject to the authority” of the United States if their children born here are to be classified as having acquired the status of U.S. citizen:

This understanding was upheld in 1872 in the Slaughterhouse Cases which dealt with the Privileges or Immunities Clause of the Fourteenth Amendment. In the opinion, the Supreme Court stated the 14th Amendment:

“…not merely subject in some respect or degree to the jurisdiction of the United States, but completely subject to their political jurisdiction, and owing them direct and immediate allegiance.”

If they are British and the British gov’t makes a law, that law applies to all British citizens, whether or not they are in Britain. If they are Mexican citizens and the Mexican gov’t demands all of its citizens return to Mexico, then those citizens are required to return to Mexico or face the consequences of refusing that demand. Any laws implemented by Britain or Mexico would, in no way, impact an American citizen in the U.S. or France or Italy, etc.

U.S. citizens living and working in another country are still required to pay U.S. income tax because they are subject to the jurisdiction of the U.S.

ANY child born in the U.S. to non-citizens ARE non-citizens. ALL of them need to be deported. If they then want to become U.S. citizens, they need to apply and follow the same process as anyone else.