SCHOOL TRUSTEES TO MEET WITH FBI REGARDING “HARASSMENT” BY PARENTS

SCHOOL TRUSTEES TO MEET WITH FBI REGARDING “HARASSMENT” BY PARENTS 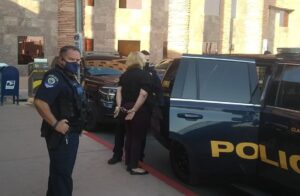 This week, the Biden Administration sent out letters to CCSD and the other 14,000 school districts across the country to coordinated a crackdown on parents who speak out against Critical Race Theory, transgender policies, sex ed and vaccine and mask mandates.

CCSD has been an epicenter of parents and teachers verbally blasting politically motivated school trustees at meetings sometimes lasting until 1 am. Hundreds have shown up to voice their opinions on mask and vax mandates and a host of other issues in recent weeks. 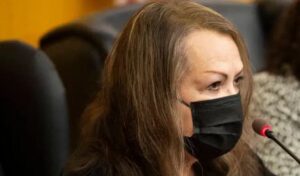 According to court records, only about 5 parents have been detained and release with an order to appear in court for not wearing their masks and for yelling at meetings. According to police, not one incident of violence has been documented over the past few months by agitated parents, teachers and administrators. And not one person has been convicted any serious violence at any Clark County School Board meeting to date.

Parents have voiced their frustration at the school district’s refusal to listen to parents instead of ignoring them on policy issues. Now the CCSD Trustees are meeting with the FBI and the Biden administration DOJ to develop a plan to target parents who speak out forcefully in defense of their children.

In a letter dated Oct, 4, 2021 the Biden Department of Justice invited the school boards to meet with FBI in an effort to intimidate and silence parents according to activists we spoke with.

“Parents are speaking out because our schools are failing to teach our kids reading, writing, arithmetic and our history. Instead, they’re indoctrinating our kids with Democrat Socialism. They just want to shut us up. They want to be in total control.”

“Parents who speak out about their concerns at School Board meetings should not have to worry about an FBI agent knocking on their door. The Clark County School Board has been operating in a grey area of power that historically belonged to parents. The grey area I am referring to are mask and vaccine mandates.” 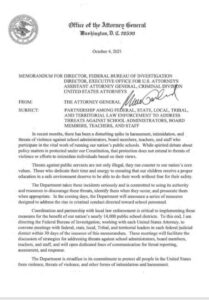