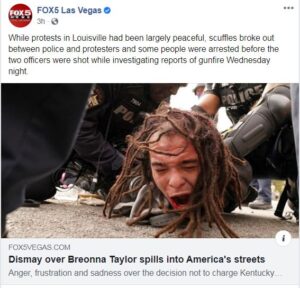 At first I thought the Fox 5 Las Vegas’ FB post headline was satire, but it was for real. In a story posted this morning titled “Dismay over Breonna Taylor spills into America’s Streets” Fox 5 Las Vegas added the following FB post clip “While protests in Louisville had been largely peaceful, scuffles broke out between police and protesters and some people were arrested before the two officers were shot while investigating reports of gunfire Wednesday night.”

This quote is from the article’s first paragraph “Violence seized the demonstrations in her hometown of Louisville as gunfire rang out and wounded two police officers.”

So, accept for the gunfire, cops shot, rioting, arrests and fights, the protest was mostly peaceful? When one reads this and realizes that its not satire but dangerous advocacy and defense of violence in our city streets one must demand action to protect our civil society. When one sees the videos from Louisville, with fires, looting, riots and shootings, there’s nothing peaceful about them. Calling that peaceful is purposeful political advocacy of violence.

Then those same types of Antifa and BLM agitators were downtown here in Las Vegas last night cause a trouble. Its time to say enough is enough. Fox 5 Las Vegas sponsors need to hear how folks who want a peaceful civil society feel about their support for Fox 5 “NEWS”.

The U.S. media are treating the BLM and Antifa thugs like they treat the Palestines when they fight with Israeli police. When the Palestines throw rocks and fire missiles and when the Israelis fight back the Liberal media and the U.N. condemn Israel.

Even though the story was written by AP reports, Fox 5 Las Vegas must take responsibility for posting, highlighting and excusing violence.

360 News reached out to Fox 5 Las Vegas for comment but did not get any response.