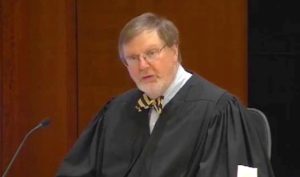 Last night, Federal Judge James Robart, of Seattle, issued a nationwide restraining order blocking President Trump’s immigration/visa pause from seven nations deemed significant sources of terrorism by the Obama Administration following dozens of attacks in Europe and the US over the past 2 years in which hundreds of civilians were murdered by radical Muslims. Many of the attackers claimed allegiance to The Islamic State.

Robart sided with Washington Attorney General Bob Ferguson, who filed a suit to block key provisions of the president’s executive order, which also bars Syrian refugees from entering the country. The order pauses the visa program for 120 days while the Trump administration reviews and reworks immigration screening procedures.

But a Federal Judge in Boston dismissed a similar claim last week siding with the President.

Judge Robart’s decision is being described by liberals as enforcing the rule of law. But since when do 2 brothers from Yemen have a US Constitutional right to enter the United States of America. In World War II the US blocked Germans, Italians, Japanese and a host of different people from many nations all over the world from entering the US.

According to President Obama’s ICE records, from 2011 to 2015 over 46 million people were issued visas to enter the US. Of those over 3.5 million never left and are deemed illegal aliens.

According to critics of the court’s decision “The Judge’s order essentially wipes out the US border granting constitutional rights to every person in the world to enter the US. He is saying everyone in the world has a right to enter the US, period. This judge needs to be impeached. His decision is so radical and extreme that he has certainly violated his oath of office to uphold the US Constitution.”

Rob Lauer said “It appears after other US Federal Judges denied similar lawsuits, liberal’s judge shopping paid off. This is part of a larger battle against Global Elites who seek to redistribute populations to reshape the political order of the world.”

President Trump tweeted his response to the federal Judge’s decision. 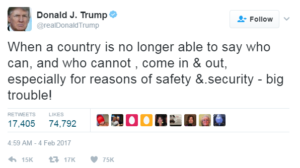 Statement Released by The White House:

At the earliest possible time, the Department of Justice intends to file an emergency stay of this order and defend the executive order of the President, which we believe is lawful and appropriate. The president’s order is intended to protect the homeland and he has the constitutional authority and responsibility to protect the American people. 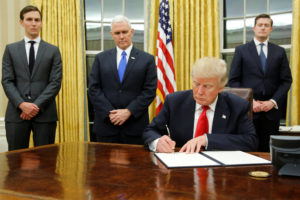 THE WHITE HO– USE

Office of the Press Secretary

PROTECTING THE NATION FROM FOREIGN TERRORIST ENTRY INTO THE UNITED STATES

By the authority vested in me as President by the Constitution and laws of the United States of America, including the Immigration and Nationality Act (INA), 8 U.S.C. 1101 et seq., and section 301 of title 3, United States Code, and to protect the American people from terrorist attacks by foreign nationals admitted to the United States, it is hereby ordered as follows:

Section 1.  Purpose.  The visa-issuance process plays a crucial role in detecting individuals with terrorist ties and stopping them from entering the United States.  Perhaps in no instance was that more apparent than the terrorist attacks of September 11, 2001, when State Department policy prevented consular officers from properly scrutinizing the visa applications of several of the 19 foreign nationals who went on to murder nearly 3,000 Americans.  And while the visa-issuance process was reviewed and amended after the September 11 attacks to better detect would-be terrorists from receiving visas, these measures did not stop attacks by foreign nationals who were admitted to the United States.