Today a crazed liberal Bernie Sanders supporter, James Hodgkinson, allegedly shot a Congressman after asking what party the Congressman was from at a park near Washington D.C. Hodgkinson died of his wounds earlier today at a hospital after Capitol Police shot him at the park.

According to the Virginia Shooter’s Facebook Page, he owned a home inspection company in Illinois and was a big Bernie Sanders supporter and a self-proclaimed “socialist.” So why are the local Las Vegas media refusing to report this? Channel 13 News just skipped right over that part identifying him in their news report online this morning. The same Channel 13 News that did a “News” piece this week about the lack of gun control laws that past following the shooting at the Pulse Night club last year. I’m still not sure if that was a news or opinion piece.

But as usual the liberal press will start blaming the lack of gun laws for the shooting. But there are a whole bunch of laws the shooter broke today yet not one of those laws stop him. What stopped him was men with guns shooting back. That’s the lesson to take away here.

Expect the liberal press to give the violence against Trump and his supporters in the news and on the streets of America a pass for this. The Antifa and Caesar Play in New York City killing Trump had nothing to do with this man’s rage today the MSM will say.

At 360Daily.net we tell our audience up front we approach news from a conservative/libertarian point of view, unlike those other news outlets pretending to be balanced but in truth are closet liberals.

Among the mass of political posts are rants which Hodgkinson made about Republicans:

“Trump is a Traitor. Trump Has Destroyed Our Democracy. It’s Time to Destroy Trump & Co.”

“Republicans Hate Women, Minorities, Working Class People, & Most All (99%) of the People of the Country.”

“Republicans are the Worst Group of People to Ever Govern the USA. They Hate 99% of All Americans & Yet some Ignorant Country Bumpkins Still Vote for Them. They Haven’t Helped anyone But the Top 1% for Decades!”

“Republicans are so Stupid, if they had a Brain, They’d Take it out & Play with It.” 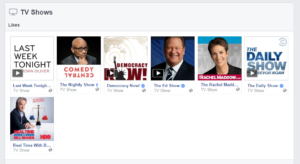