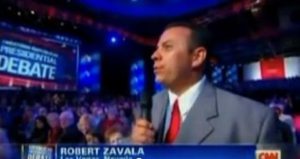 As early voting continues to move forward and Election day is just around the corner, many political candidates are feeling ambushed by scam artist Robert Zavala who allegedly took money upfront to produce banners and rent out A-Frame signs across the valley. They feel ambushed because Zavala took their money and never posted the A-Frames. 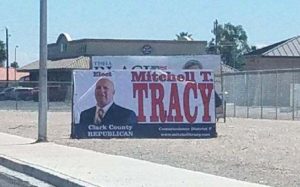 So far about 6 or seven campaigns have been victimized by Zavala that we know of. Here is what we do know. Most of the campaigns were very reluctant to speak on the record out of fear that the incident may be used against them in the election. And frankly, many are embarrassed they fell victim to the alleged scam.

Zavala, represented himself as the President of Campaign Inc, but 360 found he just recently filed the DBA “Campaign” and not Campaign, Inc. on March 30, 2018 with the Clark County Recorder’s office. 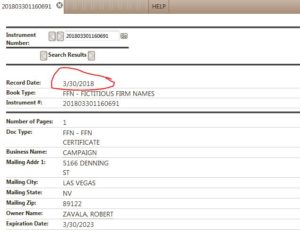 In addition, 360 uncovered a judgment against Robert Zavala DBA Campaign, Inc. in Reno Justice Court from 2014 for $5,776 for “Contract default based on failure to provide services, and failure to return prepayment for those services.” 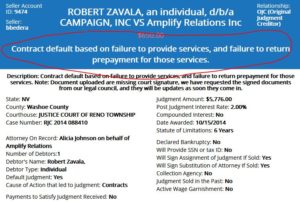 One candidate decided to go to his office to confront him and found a notice from the City of Las Vegas on the door of an empty office ordering Zavala to comply and obtain business license. 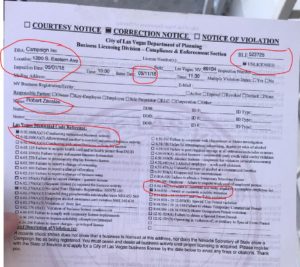 What makes this case so frustrating for so many of the candidates we spoke with is that Zavala came highly recommended by other candidates that said he did a great job for them.

One candidate who agreed to speak on the record, Clark County Candidate for District F, Mitchell Tracy told 360 that he tried to file a police report and Metro refuse to look into the fraud case, claiming it’s a civil matter.

If you’ve been a victim of Robert Zavala and or Campaign Inc. please email us at [email protected]