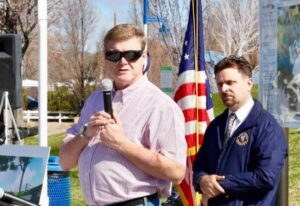 Nov. 2, 2021
Rob Lauer Political Reporter
Nevada (CD2) (R) Congressman Mark Amodei has served in Congress since 2011. (R) Amodei, the sole Republican member of Congress from Nevada, has been flirting with running for Governor for months. Many political folks speculated that after his friend, former U.S. Senator and Nevada Secretary of State, Dean Heller jumped in the race last month, Amodei would not jump in the race.
.
Amodei, a very moderate Republican in very conservative rural Nevada just made it official in a press release.
.

CARSON CITY — U.S. Representative Mark Amodei (NV-02) today announced he will not be running for the Office of the Governor in 2022.