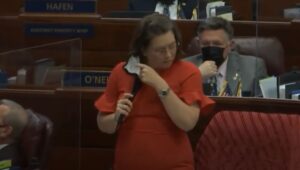 One term Assemblywoman and former Mesquite City Councilwoman Annie Black is officially running for Congress against Steven Horsford in the newly drawn Nevada Congressional District #4. Black will be facing off against Business owner and Retired U.S. Air Force Major Sam Peters in the Primary and Boxer Jessie Vargas. Peters has raised over $500k to date according to a recent press release from his campaign.

While serving in the State Legislature in 2021, Annie yanked off her mask in session on the floor

“to deliver a statement about how stupid the Legislature’s unending mask mandate was. Of course, the Democrats did not like that, so they censured me and removed my ability to speak on the floor. I stood alone against the mask mandate. Not a single Republican joined me. But hours after the incident, the State House dropped their mask mandate and reopened the people’s house.”

Annie Black said she is running because

“The Biden-Horsford economy is hurting Nevadans; it’s taking our hard earned money, and robbing us of our ability to provide for our families. Inflation is through the roof. Nevada unemployment numbers are the highest in the nation. Biden’s reckless spending has allowed the national debt to grow out of control. And, as if that’s not enough, Biden’s vaccine mandate is forcing people out of their jobs.

Horsford will never stand up to Joe Biden and Nancy Pelosi. Nevada needs a conservative fighter in Congress who will be a check and balance on Democrats’ reckless policies.”

“I welcome everyone into the race. The more the merrier”

Peters went on to say

“Horsford continues to push his Socialist Democrat policies on our communities, showing once again that he wants Nevadans Build Back BROKE!”

The new district lines shifted down into North Las Vegas more and out of the rurals a bit. But the new district added thousands more folks from Nellis Air Force Base which former Airforce Major Sam Peters stands to benefit from. This is Sam’s second run at the nomination for CD4. He lost in the primary to Jim Marchant, who went on to lose to Horsford by 4.9%.

Annie Black won her current State Assembly seat by some 70% just 2 years ago. Annie has built in dedicated following among base voters in the community but starts out with no money.

“The Democratic Party left me,” he said. “That’s when I made the decision to run as a conservative. I mean, it’s quite clear. I’m pro-life. I’m pro-guns. I’m all for family values and for having strong law enforcement.”

After the Wall Street Journal Poll in December showed Hispanics shifting towards the Republican Party and the generic Republican vs. Democrat ballot is now plus 10 points for Republicans, Nevada CD4 is a key race to watch.