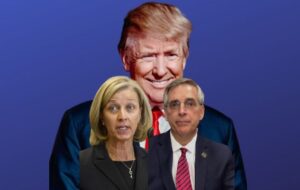 Following Nevada GOP’s censure of Nevada SOS Barbara Cegavske, this weekend the Georgia GOP censured Secretary of State Brad Raffensperger on Saturday for “dereliction of his constitutional duty.” Raffensperger, like Cegavske screwed Trump last year before, during and after the November elections. Trump forces in both states held them accountable calling them out at their state GOP conventions censuring both.

On April 11, 2021, the Nevada Republican Central Committee held their annual meeting where they passed a resolution censuring Nevada Secretary of State Barbara Cegavske after she lied about investigating voter fraud allegations in the 2020 elections. Since her censure, Cegavske’s office performed a cursory investigation finding dozens of folks who did voted twice, were dead or lived out of state. To date, Cegavske has refused to charged a single person with violating the law.

Nevada GOP Chair Michael McDonald was just endorsed by Pres. Trump for his reelection. Chairman McDonald told 360 News “Cegasvke has a duty to the people of Nevada to charge folks who broke election laws, whether it’s 2 people, 2,000 people or 20,000 people.”

As Trump forces consolidate political power in state parties across the country, RINOS are desperately pushing back. RINOS in Nevada like Chuck Muth and Mike Roberson continue to stand by Cegasvke even as evidence of her complicity and corruption continues to flow from her office in recent news reports. The RINOS in Nevada teamed up with Dem News outlets in recent weeks to slander Trump supporters in Nevada trying to label them anti-semitic and Proud Boys.

WHEREAS, Secretary of State Brad Raffensperger failed to perform his duties in accordance with the laws and Constitution of the state of Georgia, and Republican Party values, including but not limited to:

WHEARAS, the fecklessness and failures of Secretary Raffensperger were enabled by the actions and inactions by others such as Lt. Governor Duncan, who denied that there was election fraud and punished Georgia Republican State Senators who asked for election audits; Attorney General Carr, who allowed his office to file an amicus brief opposing the lawsuit asking for inspection of the Fulton County absentee ballots; and legislative leaders who failed to fully address known election issues prior to the runoff; all have, either by their direct action or inaction, significantly eroded confidence in our state’s election system.

NOW, THEREFORE BE IT RESOLVED that the Georgia Republican Party Convention censures Secretary Raffensperger for dereliction of his Constitutional duty; and calls on Governor Kemp and all elected officials to repair the damage that has been done and commit themselves to securing Georgia’s elections.