SISOLAK MAKES IT LEGAL TO WILLFULLY INFECT SOMEONE WITH HIV

SISOLAK MAKES IT LEGAL TO WILLFULLY INFECT SOMEONE WITH HIV 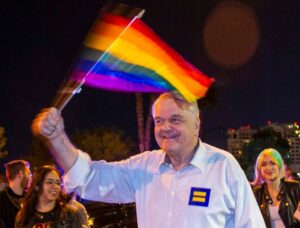 Radical California Gay advocates won a huge victory in Nevada this week when Gov. Sisolak signed a bill decriminalizing intentionally infecting someone with HIV/AIDs As our local Dem News celebrated Sisolak’s pro-gay bill signing they forgot to mention the details.

As celebrated on Dem News Fox 5:

SB 275: repeals a Nevada statute that makes it a felony for someone who has tested positive for HIV to intentionally, knowingly or willfully engage in conduct that is intended or likely to transmit the disease. The law also reestablishes the Advisory Task Force on HIV Exposure Modernization for the 2021-2022 Legislative interim, Sisolak said.

“Repealing that statute means a person who has contracted HIV and who engaged in such behavior would instead be given a warning as their first offense and, after a second offense, would be guilty of a misdemeanor — a punishment that is consistent with the treatment of other communicable diseases,” the group Silver State Equality said in a media release.

“Today, Nevada recognizes HIV as a public health issue, not a criminal one. issue. With his signature, Governor Sisolak has moved Nevada HIV laws into the 21st century by aligning them with modern science, ultimately helping to reduce stigma and discrimination against people living with HIV. When people are no longer penalized for knowing their status, it encourages them to come forward, get tested and get treatment. That’s good for all Nevadans,” said Silver State Equality State Director Andre C. Wade. “The HIV epidemic will end not by threatening people with criminal prosecution, but instead, by encouraging people to get tested, and by providing them access to care. Today’s signing is especially great news for Nevada communities of color and members of the LGBTQ+ community, who are disproportionately impacted by HIV.”