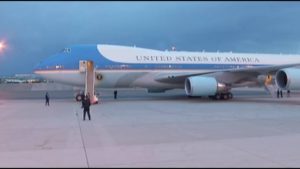 AIR FORCE ONE TODAY AT MCCARREN WITH OBAMA CAMPAIGNING FOR HILLARY

President Obama made a quick trip to Las Vegas today to give a speech at Cheyenne High School in North Las Vegas just as early voting kicks off in Nevada. At a cost of over $1 million dollars flying Air Force One round trip from Washington D.C. to Las Vegas, motorcades, secret service and Metro Police resources all to campaign for Hillary Clinton.

Early voting started yesterday in Nevada and President Obama flew out from Washington D.C. to motivate black voters to get out and vote for Hillary who has an enthusiasm gap. More people vote during early voting in Nevada than on election day.