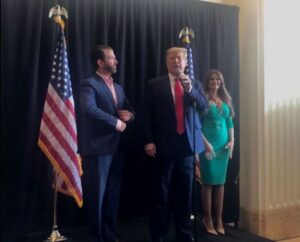 This morning, at the Trump Hotel in Las Vegas, while Don Trump Jr. was addressing a group of local Republican supporters, President Trump made a surprise visit to address the crowd of loyalists. The President is in town for the next few days, leading upto the Nevada Caucus. The Nevada GOP already voted to table the caucus and endorse President Trump for re-election a few months ago.

But the President is expected to attend a “Hope for Prisoners” graduation ceremony at Las Vegas Metro Police Headquarters tomorrow and he will be headlining a Rally Friday night at the convention center.